Don’t remember where you were when JFK was shot? Never wore tie-dye or got into the Woodstock vibe? Do you cringe a little when someone calls you a Baby Boomer?

Maybe that’s because you aren’t a Boomer. 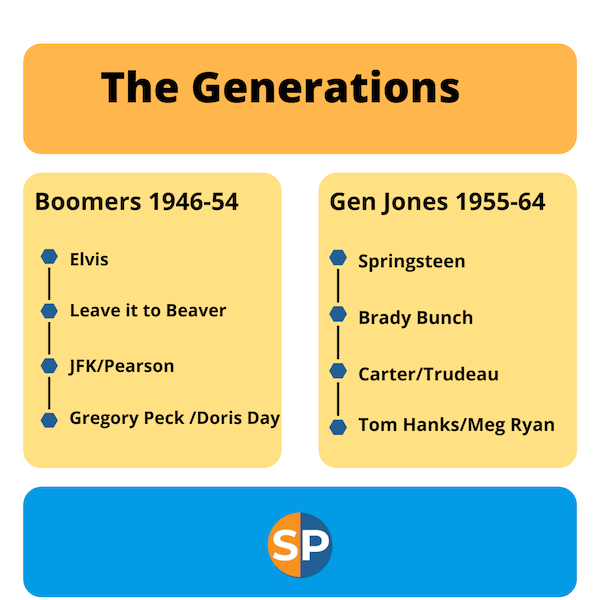 Gen Jones describes a group that doesn’t necessarily relate to the history, values and experiences which shaped the Baby Boomer generation.

The term was coined by Jonathan Pontell, himself a Joneser who saw the distinctions between early and late Boomers.

Boomers came of age during the post-war economic boom. They were all about flower power, the Beatles invasion, and Leave it to Beaver.

Generation Jones came of age during a recession with inflation, high unemployment, acid rain, terrorism, and de-industrialization. They liked the Beatles, but Generation Jones rocked to Elton John at school dances. They grew up watching Three’s Company and Eight’s Enough.

They also came of age as financial markets were de-regulating and Wall Street saw exponential growth. Wealth was the new flower power, and people were “keeping up with the Jones.” Thus, the moniker Generation Jones

President Barack Obama raised the profile of this generational segment when he identified as Gen Jones during his first election campaign. Other famous Gen Jonesers include Bill Gates, Angela Merkel and Madonna.

Why is it important?

The experiences of Gen Jones altered the worldview and jaded the idealism expressed by early Boomers. This changed their consumer behaviours, workplace expectation and goals for the future.

Many political leaders are Jonesers, as are leaders in organizations like NATO, the UN and the WHO. They are forging international affairs and policy based on their worldview.

These insights are also important to workplace cultures. A Gen Jones manager will lead differently than a Boomer. They will relate differently to team members from other generations.

Lumping Gen Jones in with the Baby Boomers misses opportunities to understand motivations, communicate and collaborate in politics, workplaces and in politics.